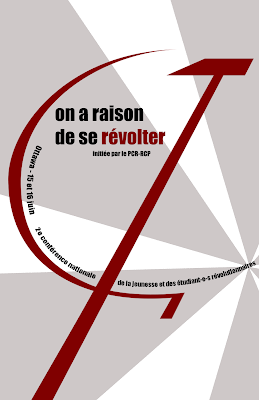 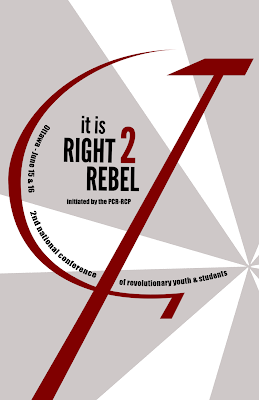 Maoist Rebel News: Not Our Comrade

The University of Ottawa Marxist Students' Association unequivocally condemns the recent misogynistic and homophobic outburst of Maoist Rebel News, which can be found in a video he posted to his YouTube channel on March 20, 2013. In said video, Maoist Rebel News defends his use of bigoted language on the basis of 'free speech' and on the basis that so-called 'language police' should not be able to dictate how he acts in his private conversations. He also accuses those that attack the use of such language as hiding behind what he terms the 'feminism shield', and equates them with Nazis. This is unacceptable.

First and foremost, the Marxist Students' Association stands with marginalized groups in their struggles against oppression. This includes struggling against the use of oppressive language, which reinforces the dehumanisation that these groups face on a daily basis. Regardless of whether or not Maoist Rebel News is a homophobe or a misogynist, the language that he uses lets homophobes and misogynists know that their thoughts and actions are OK. Before he disabled the comments on his youtube video the effects of this were fairly obvious; legions of his followers felt empowered to lambast women and LGBTQ*+ people. Furthermore, the use of these words in private is no different; Maoist Rebel News must combat this liberalism towards himself. We feel it is obvious that such activities are unacceptable for someone who has pledged himself to the liberation of humanity.
Given that Maoist Rebel News considers himself to be a Maoist, we make this appeal to him: the Maoist tradition is renowned for the spirit of self-criticism as a means of accounting for past mistakes. We demand that Maoist Rebel News self-criticise for his actions and words and issue a public apology. Only then will be able to again consider him a comrade.

Whither the Student Movement in Ottawa? (2010)

This article originally appeared in Social Revolution Volume #1, Issue #2, published in the summer of 2010. It was written as response to fractures developing within the student “movement” at the time. The student “movement” has not remained static since the publication; there have been numerous developments (such as: the almost complete degeneration of the social-democrats at Carleton University, the deepening of tensions between radical and reformist trends within the student “movement”, the establishment of the Marxist Students’ Associations at Carleton and uOttawa, and the founding of the Revolutionary Student Movement) that render much this article obsolete. Despite this, the author feels that the article still consists of a decent appraisal of the class forces at work within the student “movement”, and the developments since this was written have served only to reinforce the predicitions and solutions suggested herein. 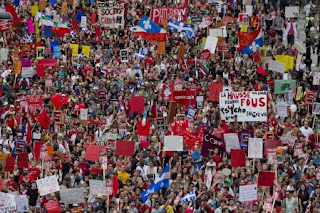 Education for Liberation! Get Capitalism Out of the Classroom!

This was initially published on February 1st, 2012 as a leaflet for the Canada-wide "Education is a Right" rally.
Today, students across Canada are standing up and demanding much-needed education reforms. Students' demands include lower tuition, reduced student debt, and increased government funding for education. And while we (as fellow students) agree with the spirit of many of these demands, we don't think they go far enough. For a truly free education, for an education that allows us to realise our full potential as individuals, we need to abolish capitalism.

The Role of Education Under Capitalism
Despite what university advertisements say, education under capitalism has nothing at all to do with building world leaders, complete individuals, or any other nice-sounding nonsense. Capitalist education is primarily concerned with training workers who are just qualified enough to become another cog in the capitalist machine. This fact is pretty evident; capitalism needs a large pool of unskilled labourers and therefore most people only receive a highschool education. Similarly, capitalism needs relatively few skilled workers, and thus few people go to universities. Education under capitalism is a tool used by the capitalist class to produce workers, and therefore to continue exploitation
Because of this fact, education under capitalism takes on the characteristic of a job. We are constantly concerned with grades rather than learning. We have a boss in the classroom, just as we do in the workplace. Students have very little control over the education process. Students are forced to be more concerned with their job prospects than with being intellectually fulfilled in their education. In so far as capitalism exists, education can not be a liberating experience. There is no liberation within the confines of capitalism.
This being said, we recognise that higher tuition fees and student debt represent a serious barrier to access to education. Students from proletarian backgrounds, aboriginals, immigrants, and other marginalised groups are under-represented in post-secondary institutions. Free education may result in the elimination of some of these barriers, but in their place others would rise. At the end of the day we'd still be forced to face the greatest barrier to human progress: capitalism. It's clear then that calling for things like a free education, lower debt, and more government funding doesn't strike at the root of the problem. A free education under capitalism is still an education under capitalism.

Education in Socialist Societies and Beyond
For a truly liberating education we need to do away with capitalism, this much is clear. But what comes after? What should education under socialism look like? While we can't paint a complete picture (this is something that should be democratically decided by the working class after all), we can make a few suggestions.
End the Distinction Between Manual and Mental Labour!
Universities under capitalism promote the idea that mental labour is superior to manual labour. Hence people in management positions tend to go to universities, and workers tend to go to colleges or have no post-secondary education at all. For an education that is truly liberating to humanity, the two types of labour must be combined. Every type of labour should be seen as an educational opportunity, and as a society we shouldn't deny education to those doing work. Those that have university educations should not be put in command over those that don't.
Similarly, the university under capitalism exists as an institution apart from society. For a truly liberating education for all, universities need to be reintegrated into the broader working class. We need to end the university as an institution. A university in every workplace and neighbourhood, and a workplace and neighbourhood in every university!
All Power to the Faculty, Support Staff and Students!
Even at their best, universities are governed by undemocratic administrations and corporate controlled Boards of Governors. For a truly democratic and liberating education, control over the educational process needs to be put in the hands of faculty, students, and support staff. Educators need to be given the freedom to pursue critical approaches to pedagogy. Students need to be given a chance to learn in an environment free from capitalism.
As for support staff, they should no longer be treated as the under-class at universities. As we decentralise universities, those that run and maintain the university should be those that use it; namely everyone. By making everyone support staff, we can do away with the distinction between mental and manual labour on our campuses.
Everyone a Student and a Teacher!
Just like we have a boss in the workplace, in education under capitalism we have a boss in the classroom. Clearly we can't talk of a liberating education if the entire process is dictated to students. In order to have an education that works toward human liberation, we need to end the teacher-student distinction. Education should be a process where everyone is both student and teacher in different fields. Self-directed education, with expert help if desired, is one option that could be explored.
Keep Politics First!
Education under capitalism serves the interest of the bourgeoisie. What we need is a truly liberating education that serves the vast majority of the world’s people - the proletariat. The political content of education, as well as the people involved in education, needs to primarily serve the interests of the proletariat. In socialist societies, education needs to be concerned with transcending classes all together. Everything is a political decision, and the content and methods of education need to be treated as political questions; i.e. what class does education serve?
It's clear that the demands for lower tuition, increased government funding, and less debt -while important- will still provide an education under capitalism. For a truly liberating educational experience, we need to kick capitalism out of the classroom. Join the MSA and let's make this a reality.

An education for liberation!
Smash capitalism!